Introducing The Most Profitable Ransomware REvil

6.2.2021Cyber Threat Intelligence
Share:
In March 2021, another REvil's attack was announced. Targeting the computer giant Acer, the actors behind the ransomware asked for 50 million dollars, the highest ransom they have demanded so far. Acer was not the only victim of the notorious ransomware. Debuted in April 2019, REvil has attacked hundreds of high-profile agencies in multiple sectors. In 2020, REvil has earned more than 100 million.[1] In this report, we will introduce the basic profile of REvil and share the techniques they used in operations.

REvil, a.k.a Sodinokibi, is a Ransomware as a Service (RaaS) operation deployed by a Russian cybercrime group named GOLD SOUTHFIELD or Pinchy Spider. The group is believed to be based in Russia, as it does not attack organizations in Post-Soviet States, and refuse to cooperate with English speaking cyber criminals.[2]
REvil was highly possible the successor of GandCrab, another notorious ransomware, because of code similarities and REvil's active operations right after GandCrab's retirement.[3]

Figure 1: The timeline of REvil's appearance and GandCrab's retirement Figure 3: REvil and GandCrab's similarity on building ransom wallpaper
Numerous campaigns attacking multiple sectors were observed all over the world. The REvil actors has attacked local governments, giant law firms, multinational retailers, etc. The highest ransom they have asked was 42 million for the law firm but was now surpassed by the 50 million Acer attack. (References for the events, please see the end of this page.[4])

The Ransomware as a Service model (RaaS)

The actors of REvil adopt the Ransomware as a Service business model. In this model, Ransomware developers are responsible for development and maintenance of the ransomware, while the groups of cyber criminals, named affiliates in this model, are responsible for accessing victims' system to distribute the ransomware. The business model allows cyber criminals who are not capable of developing their own ransomware to buy the service on dark web and deploy ransomware attack.
Through this model, REvil actors provide REvil or the customized version of REvil to their affiliates. After they successfully breached victims' systems, REvil actors will ask for ransom by themselves, providing the ransom payment link. After the collection of money, their affiliates will receive 60% to 75% of the profit. Moreover, the actors also provide other paid services, such as money laundering assistance for the affiliates. 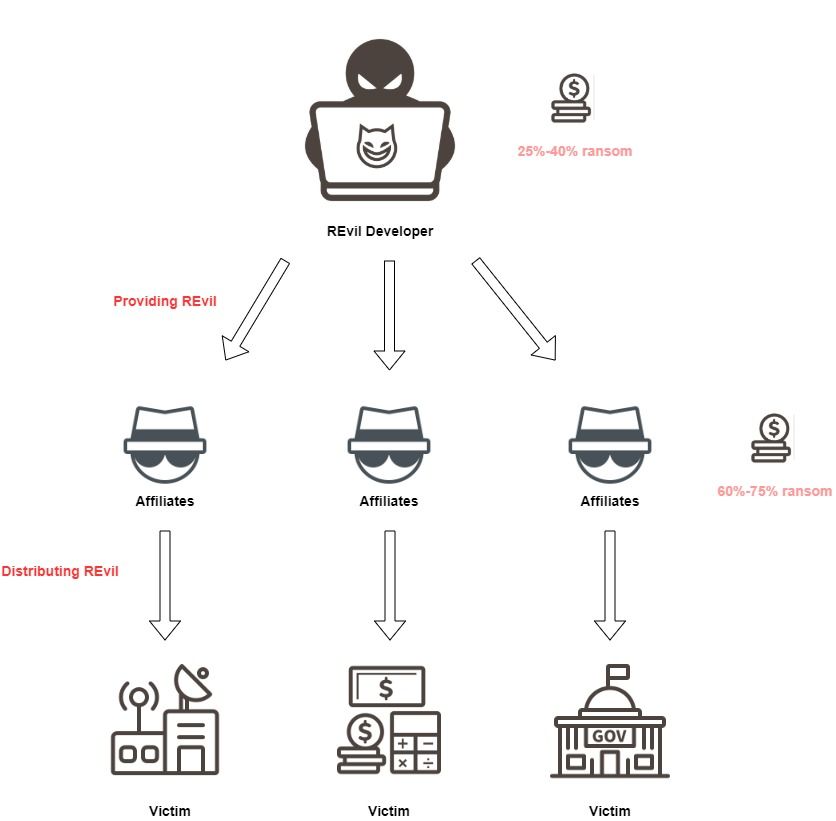 For REvil, different affiliates may use different methods for initial access. The ransomware is now distributed primarily through compromised RDP sessions (65%), phishing (16%), and software vulnerabilities (8%).[5] However, a supply chain attack distributing REvil was also observed.
REvils' actors said in an interview that they used brute force attacks to compromise RDP sessions.[1] As for phishing emails, the cyber criminals have once disguised their email as a new booking from "booking.com". They also exploit vulnerabilities. In fact, REvil's debut was exploiting the Oracle Weblogic vulnerability, CVE-2019-2725. Moreover, the actors are able to deploy new vulnerabilities after its disclosure. For example, the group used the recent disclosed Microsoft Exchange server vulnerability to access Acer's system.
The most astounding technique they deployed is supply chain attack. Around June 2019, a WINRAR distributor site in Italy was hacked.[6][7] The software downloaded from the site at that time was not the WINRAR installer but the REvil installer. Although no public announcements showing that any company was infected in this attack, the successful replacement shows that their affiliates were able to deploy a supply chain attack.
Apart from their various method on initial access, the cyber criminals also adopted several unique techniques. For example, REvil used Elliptic-curve Diffie-Hellman key exchange to encrypt files, while other ransomware often used RSA, Salsa20 or AES to do so. This method is more efficient as it used shorter key and is difficult to decrypt.

The Effective Methods for Ransom Collection

Nowadays, as ransomware attacks become a serious problem, most companies have learned to back up crucial data in case they are hit by a ransomware. However, ransomware actors develop several new methods to ensure that the victims will pay the ransom, including Double-extortion, VoIP calling, and DDoS attack.

For prevention, it is always crucial to be aware of spamming emails. Nowadays, spamming emails is still the most popular and effective method to access victims' computers.
In addition, keep an eye on new exploits and updates is also important. Ransomware groups usually are not capable of discovering 0-day exploits by themselves, but they will exploit the disclosed vulnerabilities and attack those who have not updated their system. Thus, keep computers updated and patched systems immediately after the disclosure is essential for preventing ransomware attack.
Furthermore, as the REvil business grows, the actors behind has posted on dark web to recruit more affiliates for their operations. Thus, more attacks from the group is expected. TeamT5 will keep following the ransomware and provide up-to-date information of the notorious ransomware.
To efficiently prevent ransomware attacks, TeamT5 offers a total solution for enterprise protection. Our unique ransomware containment technology is proven to successfully block many types of ransomware, which can detect and stop malicious ransomware immediately. And even restore encrypted files from the backup.
For more information about TeamT5 Ransomware Prevention total solution, please contact: [email protected]

APT Threat Landscape of Taiwan in 2020