What is Constrained Language Mode and Why it Matters

When PowerShell was first announced in 2006, it was meant to be a flexible command-line shell that features an easy-to-understand yet advanced scripting engine for IT admins. Fast forward to (almost) a decade and a half later, PowerShell has caught up in popularity and has superseded the now-legacy cmd.exe in current Windows 10 releases.
However, PowerShell has also been weaponized heavily over the past decade. There is an abundance of PowerShell-based samples all over public sandboxes, and APTs are known to abuse it whenever possible. The advanced scripting engine is often utilized to launch fileless/in-memory attacks or use it as a way around AMSI. In this post, we will be focusing on a lesser-known feature that can be used to combat this threat: Language Mode.
PowerShell was launched with an option to change its "Language Mode". This Language Mode option allows the user to switch between syntaxes allowed or disallowed. By default, all PowerShell sessions are launched with FullLanguage, which permits all the available syntaxes and cmdlets at runtime. There are four total language modes available: FullLanguage, RestrictedLanguage, NoLanguage and finally ConstrainedLanguage. In today's topic, we are here to focus on the ConstrainedLanguage mode introduced in PowerShell 3.0.

First off, let's take a look at what Microsoft Docs says about the ConstrainedLanguage mode:

No Arbitrary C# Code via Add-Type

Many PowerShell-based exploits rely on .NET-based language compilation via Add-Type - and that's already thrown out the window by disallowing arbitrary C# code compilation.

In laymen's terms, every non-whitelisted type and its methods/properties are blocked from execution. Classes such as System.Reflection.Assembly/System.Convert/System.Runtime.CompilerServices and many more are out-of-reach for threat actors, making code injection or fileless attacks that rely on additional PEs much more difficult.

Given the above limitations, this does mean that legitimate complex scripts may not be able to execute correctly. For instance, if your organization uses a script that utilizes WinForm or WPF (Windows Presentation Framework), those will not work at all.

Consequentially, modules are affected by this whitelisting system as well. Modules that rely on created types or non-whitelisted type calls will not load properly.

Therefore, it is crucial to double-check your organization's scripts (if you have any) before enrolling this policy to your endpoints.

Since, by default, this language mode is an opt-in feature, the user would either have to call $ExecutionContext.SessionState.LanguageMode = "ConstrainedLanguage" at the beginning of each session or add __PSLockdownPolicy to the system environment variables (DO NOT do this for production. See the section below. Neither of which is ideal and should only be used for debugging, unit testing, or for general testing purposes only.
Instead, the administrator(s) of your organization should deploy via WDAC (Windows Defender Application Control) on Windows 10+ or via AppLocker on Windows 7+. When implemented this way, the attacker will first have to bypass WDAC or AppLocker before gaining full control of a standard PowerShell session. A guideline regarding the deployment for individual or mass number of endpoints can be found under the Application Control for Windows article on Microsoft Docs.

Effective Against Scripts, not Standard Cmdlets

It must be made clear that merely enabling Constrained Language Mode is not enough to mitigate the risks PowerShell can bring. While restricting users to a lower-privileged language mode ensures no custom .NET assemblies or code can be executed, this does not stop attackers from crafting malicious scripts from the built-in cmdlets alone. For example, an attacker may still be able to craft a script that collects relevant intel about the computer and send it back to their C2 station.
The following, as an example, will continue to run fine under a PowerShell session with Constrained Language mode enabled.
Additionally, attackers may still be able to call external resources to achieve their goal, such as achieving persistence via schtask or placing additional payloads under shell:startup. Remember, Constrained Language mode does NOT block most existing cmdlets from functioning; in other words, it limits what the threat actor has on their disposal, but does not mean that they cannot make do with vanilla cmdlets or standard Windows applications.

Aside from weaponizing existing cmdlets, if the admins had "enabled" the language feature via __PSLockdownPolicy, then it would be trivial for attackers with administrative privileges to restore the language policy. Let's take a look at what this environment variable actually does.

We'll see that it has brought us to the SystemPolicy class under the wldpNativeMethods.cs file. In various articles that reference this environment variable, they would instruct the administrator to set the __PSLockdownPolicy variable to 4. A value of 4 corresponds with the WLDP_LOCKDOWN_UMCIENFORCE_FLAG constant, which indicates the enforcement of UMCI (User-mode Code Integrity).

The call's parent method happens to be named GetDebugLockdownPolicy, which indicates that this behavior was meant to be a debug feature, rather than something that should be in a production environment. 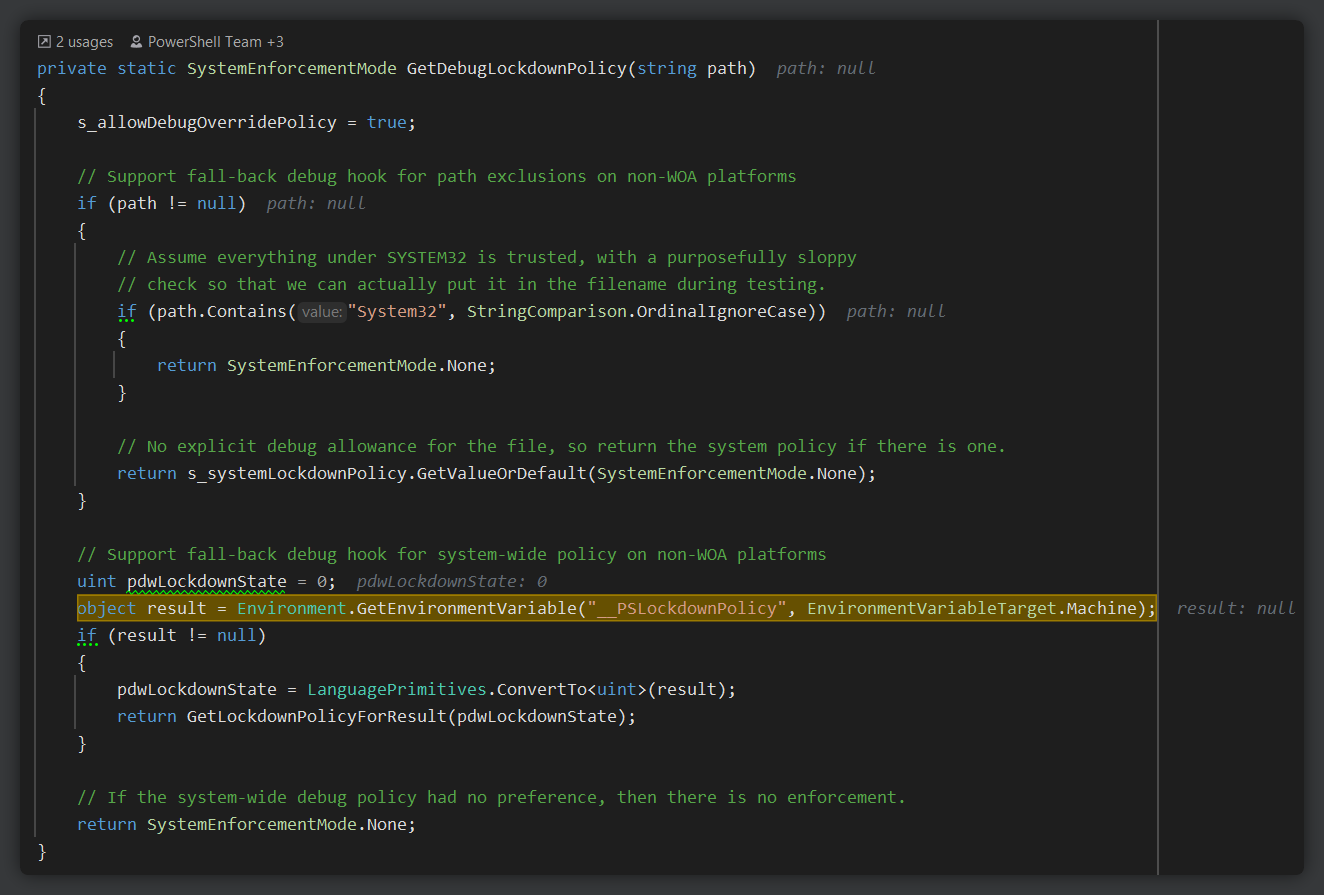 This theory is further backed up by the statement made by Matt Graeber, a renowned security researcher well-versed in WDAC. Further research also shows this behavior was mentioned by the PowerShell team in its official post regarding Constrained Language Mode as well:

As part of the implementation of Constrained Language, PowerShell included an environment variable for debugging and unit testing called __PSLockdownPolicy. While we have never documented this, some have discovered it and described this as an enforcement mechanism. This is unwise because an attacker can easily change the environment variable to remove this enforcement. In addition, there are also file naming conventions that enable FullLanguage mode on a script, effectively bypassing Constrained Language.

It must be emphasized that administrators should NOT deploy this to their endpoints as a way to enable Constrained Language mode - and be extra mindful when reading through articles regarding security features.

Another thing to consider before rolling this feature out to endpoints is legacy OSs. As mentioned at the beginning of this post, Constrained Language mode is only available on PowerShell 3.0 onwards - and Windows 7 ships with PowerShell 2.0 by default.

While it is possible to install WMF 5.1 on older systems such as Windows 7, these systems likely ship with PowerShell 2.0 as its core component as well, which is susceptible to downgrade attacks.
All the attacker needs to do is, instead of starting a standard PowerShell 5.1 session, spawn a PowerShell 2.0 session using PowerShell.exe -Version 2. Since ConstrainedLanguage mode doesn't exist in that version, it will simply fallback to using FullLanguage.

This is much less of a problem on Windows 10, as PowerShell 5.1 is shipped with the system by default and 2.0 can be removed by using Disable-WindowsOptionalFeature -Online -FeatureName MicrosoftWindowsPowerShellV2Root. After then, any attempts to launch PowerShell v2 will result in an error message.

To see how effective this mode is against hypothetical attacks, we ... Since PowerShell is now an integral part of modern Windows OSs, sysadmins should not underestimate the risks that PowerShell can bring to the organization.
In the article, we went through the benefits and drawbacks of ConstrainedLanguage and how it performs in a hypothetical test. By enabling the engine feature, the risk of PowerShell-introduced exploitation is greatly lowered - if enrolled properly. Organizations should also consider whether or not the reduced availability of modules and or scripts is worth the tradeoff before enrolling this language policy.
*Image courtesy of Pexels
2.17.2021Cyber Threat Intelligence
Share: